Graeme the 2019 winner, got off to a good start and after Day 1 was two strokes behind after a bogey-free 68. He followed that up on Day 2 with another 68 with the highlight being double back-to-back birdies from holes 14 to 18.

“All in all, really happy with that start,” McDowell said. “Felt comfortable on the golf course. My fifth time here, I’m starting to feel reasonably comfortable down here in the strong wind. Felt good on the greens, everything felt pretty solid, so look forward to getting back at it in the morning.”

On Day 3 and 4 Graeme dropped down the leaderboard with disappointing rounds of 73 and 75.

“The golf course is wide open off the tee, if you get out of position, this golf course can kind of jump up and bite you.”

Graeme missed the cut at the Innisbrook Resort in Florida with rounds of 73 and 71 finishing on +2.

Day 2
Graeme followed up a dropped shot on the 1st with 3 birdies on the front nine to go out in -2 under. On the back nine Graeme dropped shots on 11 and 14 bringing him coming home par for the day.

Day 1
Graeme started with seven straight pars only to hit a speed bump approaching the turn, with back-to-back bogeys on the eighth and ninth. A further bogey followed on the 11th after finding the rough down the right and, although he bounced back with successive birdies on the 12th and 13th, he again missed the fairway on the 14th and then put his approach shot on the par-five into water in suffering another bogey in a round of 73 and now faces a battle to survive the midway cut.

Graeme finished in tied 13th place at Bay Hill with his best result on the PGA Tour this season.

Going into the the final day Graeme was just four shots off the lead with a 69 after sinking four birdies on a bogey-free back nine. Graeme had got off to an impressive start on days 1 with an opening round of four-under par, the course showed its teeth on Day 2 with Graeme scoring 76.

Graeme said “Loved my week at @apinv. Any time you play with Rory McIlroy on Sunday things are okay. My game is trending big time. Can’t wait to get going again.”

In his final round at the Arnold Palmer Invitational presented by Mastercard, Graeme McDowell hit 8 of 14 fairways and 11 of 18 greens in regulation, finishing at 1 over for the tournament. McDowell finished his day tied for 13th at 1 over; Scottie Scheffler is in 1st at 5 under; Tyrrell Hatton, Billy Horschel, and Viktor Hovland are tied for 2nd at 4 under; and Gary Woodland and Chris Kirk are tied for 5th at 3 under.

Graeme got a bogey on the 461-yard par-4 first, getting on the green in 4 and one putting, moving Graeme to 1 over for the round.

On the 231-yard par-3 second, Graeme s tee shot went 240 yards to the left rough and his chip went 13 yards to the green where he rolled a two-putt for bogey. This moved him to 2 over for the round.

On the 590-yard par-5 fourth hole, McDowell reached the green in 3 and sunk a 13-foot putt for birdie. This moved Graeme to 1 over for the round.

On the 382-yard par-4 13th, Graeme had a bogey after hitting the green in 3 and two putting, moving McDowell to 2 over for the round.

On the 511-yard par-5 16th, Graeme got on the green in 4 and three-putt for double bogey, bringing McDowell to 3 over for the round.

After a 278 yard drive on the 458-yard par-4 18th, Graeme chipped his third shot to 8 feet, which he rolled for two-putt bogey on the hole. This moved Graeme to 4 over for the round.

Flanked by a large crowd of fans, the players made their way around Sir Nick Faldo’s latest architectural masterpiece, with fireworks coming early on in the 7,533-yard, par-72 RUMANZA course.

“We got off to a fast start with an eagle on Two. We were very fortunate to have Charley driving the ball extremely well, allowing us to go into some par-5’s with short irons. Team Rafa and his crew kept it close, and it was nice to come up the last with a 1-shot lead to see what we could do. It was a lot of fun.” commented Graeme McDowell

The action on-course teed off with a shotgun start Pro-Am competition featuring 60 players – the first tournament ever played at the RUMANZA Golf and Country Club.

Reigning victorious was the four-ball led by professionals Khalid Khan and Shahid Javed Khan and made up of Mr. Usman Akram and Mrs. Lindsay Lady Faldo who carded a score of 51 points.

The Rumanza Golf Course was opened up for golfing action over the weekend through an exciting international event labelled as the Rumanza Inaugural and the international stars who illuminated the golf course with their presence included six times major winner Sir Nick Faldo and also there was 2010 United States Open champion and four times PGA Tour winner Graeme Mcdowell from Northern Ireland. Another celebrity golfer competing alongside was 2021 Spanish Open winner and European Ryder Cup star Rafa Cabrera from Spain. To add feminine colour was the six times European Tour winner Charlie Hull whose mere presence on the golf course was an athletic site and she turned out to be an inspiration for the golfing fans and in particular golf playing women of Pakistan, many of whom were there for coaching tips and intimate closeness.

Graeme added: “One of things I’ve felt this week is the passion and the intensity for wanting success in Pakistan golf. What DHA Multan has done in creating the first world-class facility here in Pakistan is that it gives these players the opportunity to play on the type of course that they can expect to see on the Tours. Having had the chance to spend time with the young talent here in Pakistan, it’s only a matter of time until these guys move to the next level.” 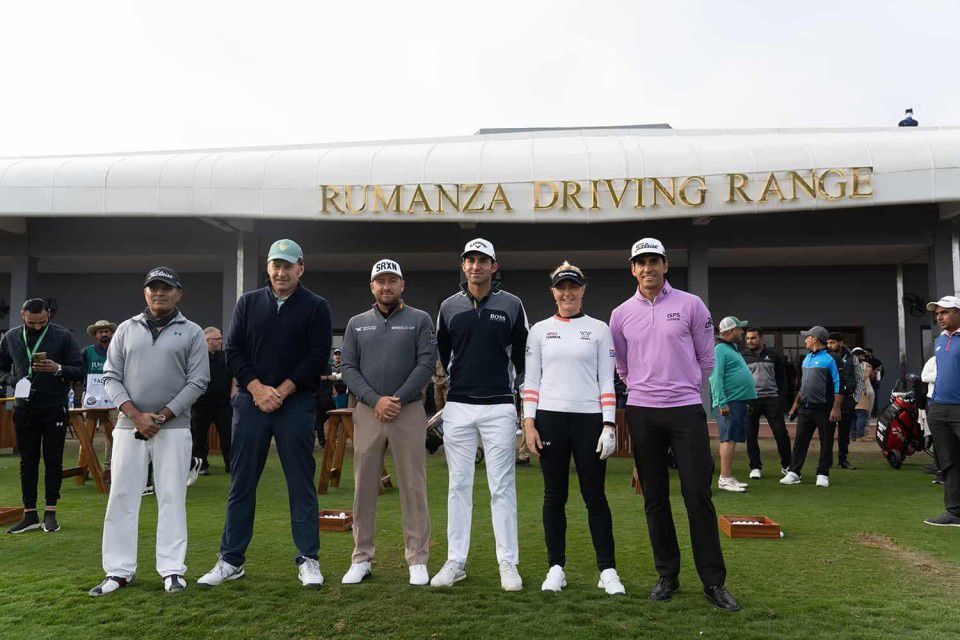 Result
Graeme up his opening three-under 68 with a three-over 74 that left him on level par and not enough to make the -2 cut.

Graeme holed one of the longest putts of his career on Day 1 — a monster 88-footer on the short par four 17th, which left him with a three-under 68 that left him tied 18th, just three shots off the lead.

“I mean, obviously watching it on TV, heard the guys talking about it, this is a quite the show here, quite the party and quite the atmosphere,” Graeme said when explaining why he’s returned to the event. “I mean, we played early this morning, so I got to see 16 fairly benign. We’ll play it tomorrow afternoon a little later on when I’m sure there will be a few beverages starting to flow, and the atmosphere should be a lot of fun.

“But the golf course is sensational. I’m not sure I’ve seen a better-conditioned golf course than this one and it’s playing firm and fast, which kind of suits my game a little bit. The greens are fantastic and it’s been one of those weeks where I’m trying to wonder why it’s been 16 years since I’ve been here.”

The 2010 US Open champion made his first birdie of the day when he knocked in a 12-footer in the amphitheatre that is the par-three 16th, which was well below its 20,000 capacity at 10.30am.

But he was soon whipping up a storm at the driveable 348-yard 17th, where he drove into a fairway bunker, splashed out to 88 feet and holed the unlikely birdie putt – his longest on record on the PGA Tour since he made one from 75 feet in the first round of the 2014 Arnold Palmer Invitational at Bay Hill.

“This might be the most ridiculous three I ever made in my life,” Graeme said. “I drove it in the right-hand fairway bunker, and I mean this putt is just greased lightning. It’s a marble staircase down there.

“I would have probably paid you about a thousand bucks for a four out of that right bunker after my tee shot, but three is outrageous. A lot of fun though.

“And to birdie 16 and 17, 16 my first time playing it in the kind of stadium like that was fun and, like I say, I look forward to getting back out tomorrow.”

Graeme bogeyed the 18th but then hit a 193-yard approach to five feet at the first to get back to two-under before two-putting for another birdie at the par-five third.

Ranked 358th in the world, he’s missed 26 of 41 cuts (63 per cent) since he won the Saudi International in 2020 and he’s trying to ease the pressure on his shoulders as he is exempt for winning the 2019 Corales Puntacana Resort & Club Championship runs out at the end of this season.

“For me it’s just day by day at the minute,” Graeme said. “I’m just really trying to layer good days on good days. And it’s been a really tough 18 months, and I’m really just trying to keep things simple, just work hard, have good days, hopefully, those will add up to being in contention, and I’ll give myself some chances to win.

“That’s really just the goal at the minute is just to try and be as patient as I can.”

“This is a quite the show here, quite the party and quite the atmosphere.”

Result
Graeme missed the cut at the Royal Greens Golf & Country Club, near Jeddah with rounds of 73 and 73 leaving him off the pace with a score of +6.

Earlier in the week Graeme visited The World Academy in King Abdullah Economic City and treated students to a lesson. Golf Saudi utilises the scheme ‘Starting New at Golf’ certification programme which includes all the basics of golf, helping to teach beginners and build-up their skills. 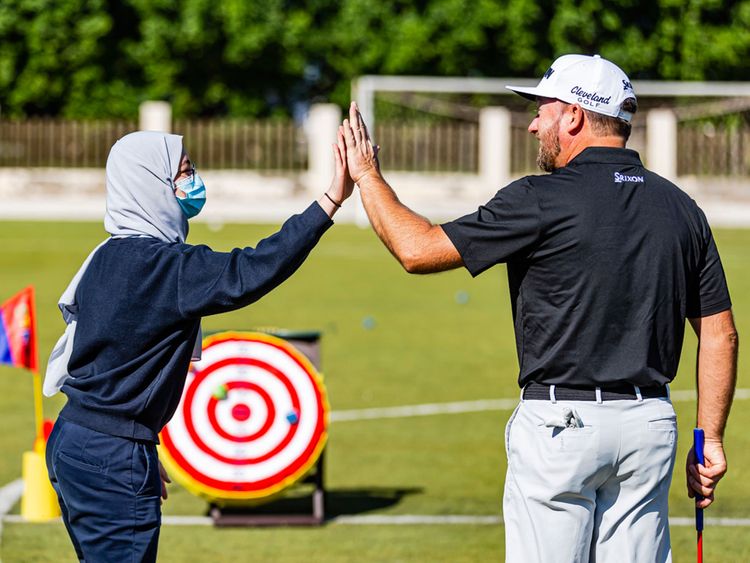 Graeme said: “It’s exciting to come back to Saudi Arabia, a country that’s investing so much in golf and is constantly trying make the game accessible to kids of all ages. In some countries we visit, golf is part of the culture and in some countries, it’s just not part of the culture at all. Everything Golf Saudi is doing here to try to grow the game in the Kingdom has been impressive and the small part what we play coming here and playing and competing at this great tournament is an important part of that kind of growth in the culture.

“It was a really important victory for me back in 2020. It got me where I want to be in the sport. It’s always great to come back to a place and play where you had good memories. It’s really inspiring.”